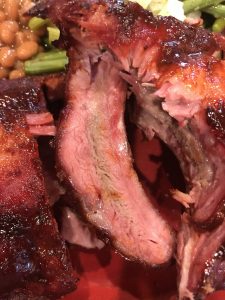 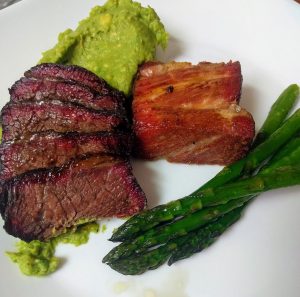 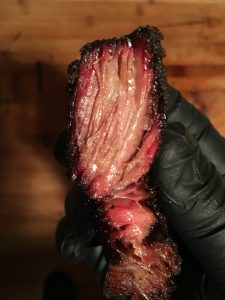 The reddish “smoke ring” around the perimeter of a slice of Q comes from the combination of meat and fire:

From the meat: Myoglobin – a substance found in muscle. It’s a spherical protein with an iron-centered group attached. What’s bound to the iron atom determines the meat’s color:

From the fire: NOx Emissions – these come from high temperature combustion (2O2 + N2 –> 2NO2; 2NO2 –> 2NO + O2). The NOx gases dissolve in the moist meat surfaces, forming nitric (HNO2) and nitrous (HNO3) acids that leach into the meat and react with myoglobin. Wood, charcoal, natural gas, and propane combustion all produce NOx, so a smoke ring can be made by most ovens. Having no combustion, electric cookers won’t make a ring by themselves.

Depth and intensity – for a bigger ring, you have several levers to pull:

Cheating – you can create or exaggerate a ring chemically by rubbing the meat with sodium nitrite curing salt (e.g., Tenderquick) before cooking. Most competition rules prohibit the appearance of the smoke ring from influencing scores, because it’s so easy to cheat this way. But the smoke ring adds a lot to the presentation of the meat – authentically-prepared barbecue will have it and most connoisseurs expect to see it.